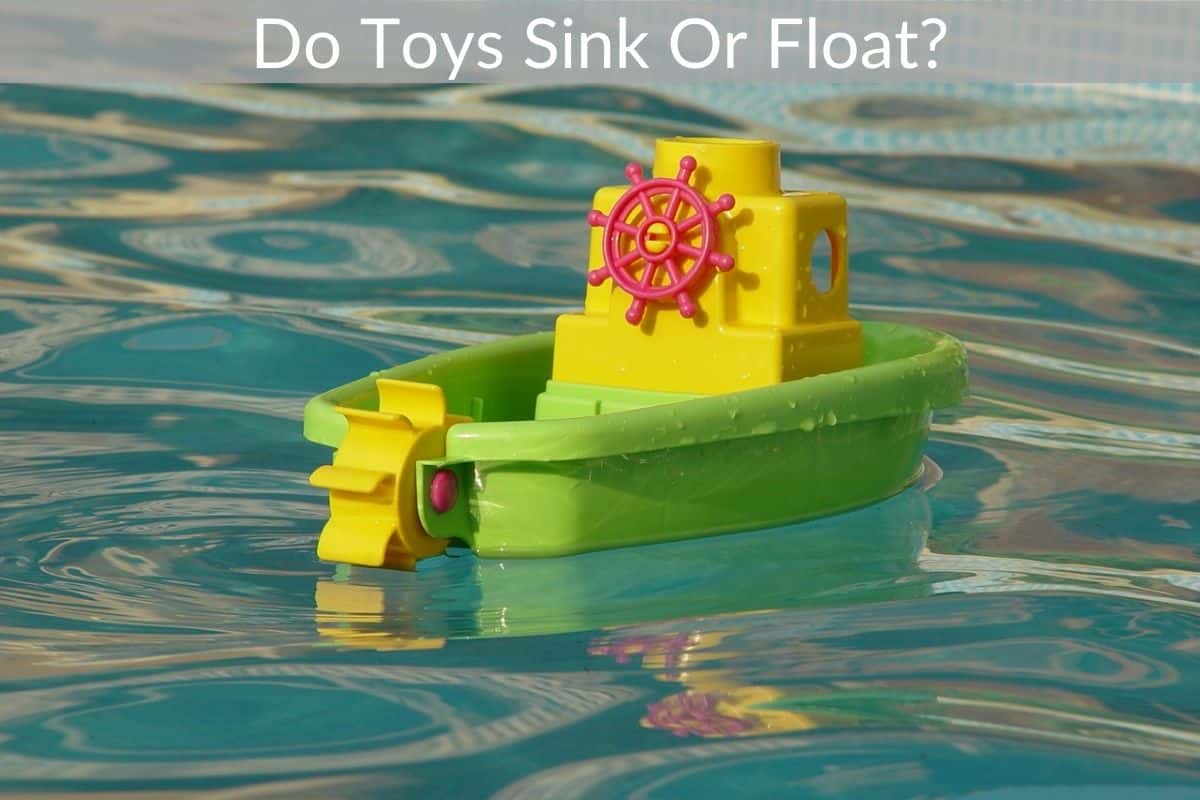 Float on top of the waves of blue water or sink below its bubbly depths? Which will a toy do when put into the liquid?

Well, it all depends on the toy!

This is an excellent question that even has a science lesson involved.

Light toys (or less dense) will float while heavy (or more dense) objects will sink. Whether toys will sink or float depends on the density of the toy and even the shape.

A scientific viewpoint from the Victoria State Education explains it well when they say,

So, when an object is lighter than the water and the force rising up from it, then it will float! Items of many different weights, shapes, sizes, or materials can all float or sink depending on the different densities of the materials.

Just as with boats of both plastic or metal hulls can all sink or float depending on different circumstances so too can toys sink or float.

Why Do Toys Float?

Density is how tightly packed together particles of an object are.

A toy with less density will float and a toy with more density will sink, but what about a boat? I mean, there are giant boats that float just fine in the water so how do they do it?

Taking what we already know about density, the answer is simple.

First of all, the shape of a boat is perfect for its purpose. Second, it doesn’t have particles taking up all of it. Some of it is hollow allowing more air to fill up the inside. And an object with air in it floats!

What Items Will Sink Or Float?

If you’re curious what items will sink or float, check out the material of the object.

Let’s take a toy car for instance. Will it sink or float?

Well, that all depends on what that toy car is made of. Is it made of wood? Then yes, it will float. Is it made of metal? Then no, it will sink. The metal car is more dense than the wooden car.

Plastic is less dense so therefore most plastic toys will typically float in water.

CK-12 explains how the shape affects the item in the water in their article. They say, “Objects such as ships may float in a fluid like water because of buoyant force. This is an upward force that a fluid exerts on any object that is placed in it.

Archimedes discovered that the buoyant force acting on an object equals the weight of the fluid displaced by the object. This is known as Archimedes’ law (or Archimedes’ principle).”

How Do You Explain Sinking Or Floating To A Child?

Explaining how density of an object when placed in water helps it sink or float might be a little bit more difficult when you are speaking to a child.

They don’t understand all the scientific terms as we do.

Doing an experiment with them will help a child understand what sinking and floating is. Then you can show them how the heavier/denser objects sink and lighter/less dense objects float.

The instructions they give are to:

• Before the students experiment, they will need to make predictions as to whether they think the objects are going to sink or float.

• What does it mean when we say “Make a prediction?” To make an educated guess about what will happen.

• Students can use the “Sink or Float Handout” page to make their predictions. Show students each individual item and have them make a prediction by drawing a line from that item to either “sink” or “float” in the picture.

• Then place one item at a time into the tub of water to find out whether the item sinks or floats.

• When all items have been tested, refer to the results handout.”

With an experiment to show which items sink to the bottom or stay afloat on the top you will be able to show which ones do and how they do it.

You can place a toy car in the liquid alongside a rubber ball. Then have them watch as the toy car sinks and the ball floats.

Then you can explain that the rubber balls molecules (aka-particles) are less dense (or there is more air in between them) than the toy car and vice versa.

In conclusion, sinking or floating toys has to do with the material, shape and density. So next time you’re curious all you have to do is throw the toy in water and see what happens.

Make your evaluation off of what you see and what you have now learned. Have fun teaching your kids the science behind how and why their toys sink or float.