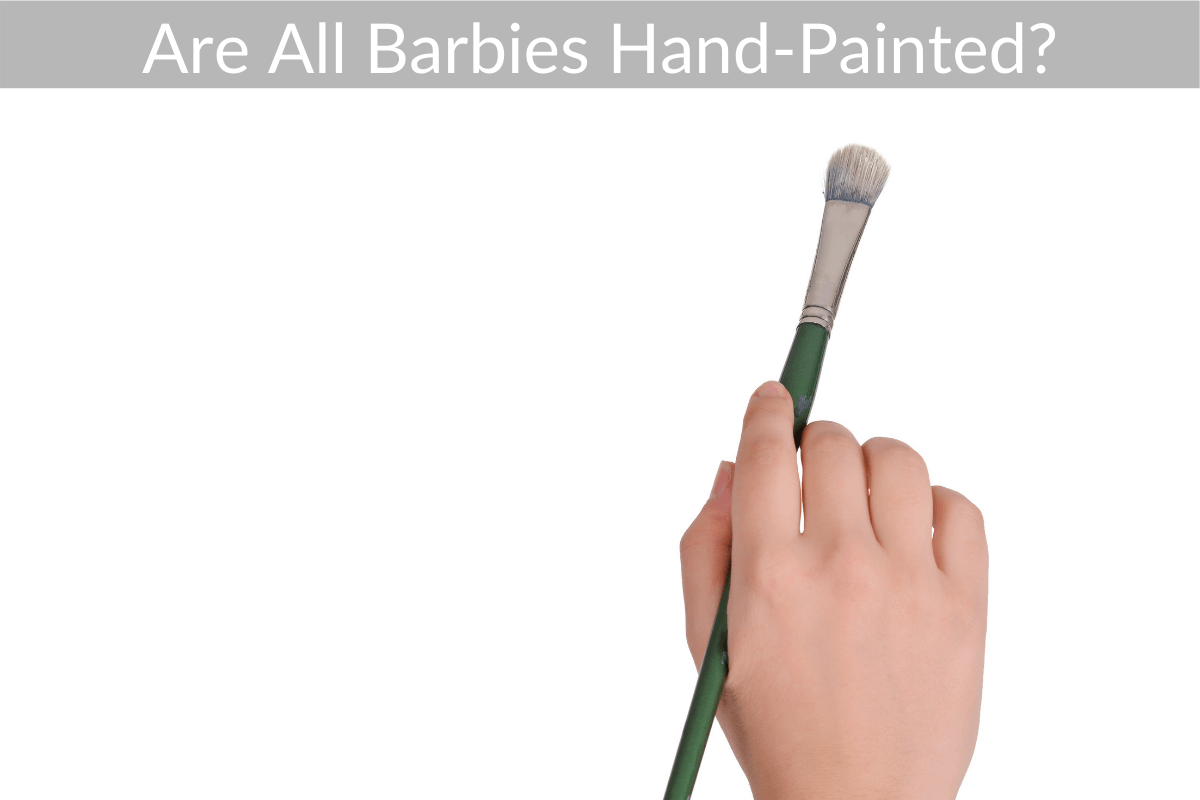 Barbie dolls are one of the staple toys that nearly every young child grows up with, and through the years they have seen a few notable changes in the way that they have been designed and manufactured.

One of the most notable ways that these signature dolls have changed is in how their faces are made.

To learn more about how Barbie dolls transitioned from being hand-painted to being mass-produced and also learn a bit more about the history of Barbie dolls, on the whole, you can continue reading.

If you want to check out the most popular Barbies that are currently on the market you can click here.

Are All Barbie Dolls Hand-painted?

Barbie dolls are generally not hand-painted nowadays, though there are some special releases every once in a while, that may see hand painting done on them by one of the many artists that Mattel has hired to produce a special edition Barbie doll.

Of course, the term hand painting should be cleared up before going further.

Barbie dolls are still painted by hand, though not in the sense that many may think of. Rather, Barbie dolls have their facial features painted on by an individual using a tool known as a stencil.

The majority of Barbie dolls nowadays get their features painted on via the use of a stencil on a production line. This makes each Barbie doll more uniform and prevents errors that could come from an individual artist hand painting millions of dolls.

Needless to say, it also speeds up the process of crafting Barbie dolls by a massive amount.

Multiple stencils are used when painting the features of a Barbie doll, and each one is used to paint on a different feature of the Barbie’s face. From eyebrows to pupils, stencils are implemented and used to great effect.

Between the years of 1958 and 1959, right around the time that Barbies were just starting out, artists crafted special Barbie dolls that were entirely hand-painted. These are known as sample Barbie dolls, and these are ultra-rare dolls that have every single feature painted by hand by an individual artist.

These Barbie dolls, however, were not sold in stores and were kept by employees and family members as mementos.

This did not last for long, however, and stencils were quickly introduced into the manufacturing process for Barbie dolls. This did not hurt the quality of the dolls, but it did make them have a more uniform appearance and reduce the uniqueness from doll to doll.

To this day this is the method that Mattel implements to produce Barbie dolls. Each doll is still painted by a human via the use of a stencil, but only very special releases and prototype dolls (which we will cover in a moment) are reserved for actual freeform hand painting.

One type of Barbie doll that has always and likely will always be totally hand-painted is the prototype Barbie doll. These Barbies are crafted by hand by one of the many expert artists that Mattel has employed.

Every single facial feature is carefully painted on.

The lips, eyes, and eyebrows all are painted to craft a new and exciting look that the Barbie will sport if the prototype design is accepted and placed into production.

The reason that these dolls get such special treatment is that they are intended to serve as prototypes (as the name implies) for future Barbie dolls. The artists responsible for crafting their facial features aim to make them as unique and appealing as possible so that they can stand out from the plethora of already available Barbie dolls.

While the process may seem simple and easy, a lot goes into crafting a new look for a Barbie doll.

Designers mix and match hundreds of different paint colors so that they can produce an exceptionally attractive color for the lips, eyes, and eyebrows of the doll, and give the doll a new spin on the Barbie formula.

How Are Barbies Painted?

Aside from the previously mentioned prototype Barbies and the very early Barbie dolls, most of these dolls are painted using stencils. An individual is still responsible for painting the features onto the doll by hand, but it is not considered “hand-painted” since they simply spray or draw the paint over a stencil and don’t free-hand it.

There are typically multiple stencils used when painting a Barbie doll’s features. Just a few are the stencils for the irises of the doll, the pupils, the eyelid eyeshadow, and the eyebrows. The dolls get painted with each stencil one at a time until the features are complete.

It may seem like a time-consuming process, but compared to dolls being entirely hand-painted without the use of stencils this is a much faster and easier process. It works out well, as every doll still gets the care that a human touch can provide and the process is sped up by a considerable amount due to the implementation of stencils.

Barbie dolls, with the exception of the occasional, fully hand-painted special release and prototype Barbies, are generally painted via the use of stencils. These stencils assist workers in crafting Barbie dolls to a high standard of quality and also helps to cut down on errors and time spent painting on the Barbie doll’s features.

Because fully hand-painted Barbie dolls are quite uncommon, and not very many have been produced since the doll’s inception, they can be worth quite a lot nowadays if you come across one.

So, if you can get your hands on a truly hand painted Barbie you can consider yourself one lucky individual!