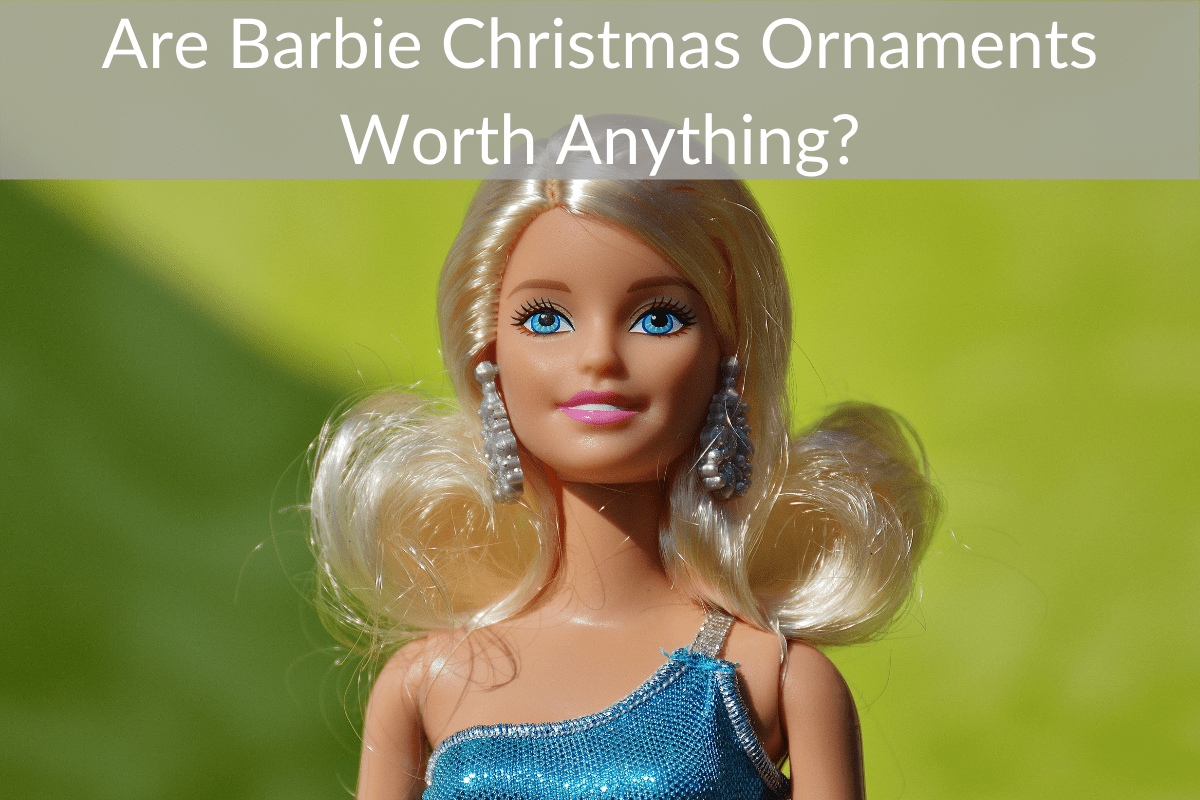 Barbie Christmas ornaments have been around since they were first introduced back in 1988 by Mattel. These highly collectible ornaments have proven extremely popular with fans of the Barbie doll, and many may wonder if they are worth anything.

I will go into more detail about these Christmas ornaments and which ones are worth more than others later in this article so you will want to keep reading.

To see some of the most popular Barbie Christmas ornaments that are currently available just click here.

Are The Christmas Ornaments Worth Anything?

Whether these ornaments are worth anything all depends on who you talk to and what the Barbie Christmas ornaments mean to them. For collectors of these items, they may not be worth a whole lot since they aren’t very rare, while to others who simply enjoy having a Barbie that is holiday themed, they may think they are worth far more.

Whether we are talking about collectors or just individuals who love Barbies, none of them value all of these Barbie ornaments equally. One would assume that the older the Barbie ornament is the more it would be worth but this is not always the case, as some of the newer Barbies are worth considerably more than the older and more vintage ones.

In general, though, when looking at Barbie Christmas ornaments, you will be able to get a decent amount of money from a majority of the collection but not an astronomical amount.

Some specific Christmas Barbies are actually worth a decent sum, sometimes doubling or tripling of their original value.

Which Barbie Christmas Ornaments Are Worth Something?

There are quite a few Barbie Christmas Ornaments, and it would take ages to go over each and every one of them and how much they are worth, so I will only go over the Barbie Ornaments that are worth a decent amount.

Anything below $20 I will not mention, as this is not really that much when compared to some of the other ornaments or collectibles out there.

To start things off, we have the very first Barbie Christmas ornament that was made by Hallmark. This original ornament has been seen to go for around $85, which is quite a hefty sum when compared to the prices of most of these ornaments.

Next up, we have the successor to the first Hallmark Barbie. The Holiday #2 Barbie ornament was the ornament for 1994. This one sells for right around $40, but could fetch more depending on the condition that it is in as well as the person buying it.

The 1996 Barbie from Hallmark is the first in the Collector Club series and fetches a decent sum of $60. It is essentially a remake of the very first Hallmark Barbie, but with a more detailed dress and different position for the arms. All in all it is a very nice collector’s piece and will fetch a decent sum if you decide to sell.

The following year we have another Collector Club Barbie. This time it was a remake of the second Christmas Barbie made by Hallmark; this ornament sells for around $40.

The next few years were quite good for those who are looking to sell their Barbies, as they are all worth quite a bit to collectors. Starting with the 1998 Barbie Christmas Ornament we have the sixth unique doll in the ornament line. This one fetches around $35.

The next one that I will mention is the Millennium Princess Barbie. This ornament can be sold for approximately $42. There is also an African American version of this doll though the price is considerably less for it.

Hallmark released another great Collector Club Barbie at the turn of the century in the form of the 2000 Christmas Barbie Ornament. Sitting at a value of around $55, this Barbie is worth a good amount for any looking to sell.

For some more recent Barbies we have the 2018 and 2019 Holiday Barbies. These fantastic dolls are some of the most expensive yet, sitting at nearly $70 each as they are very respectable collectibles.

Why Are Barbie Christmas Ornaments Popular?

The Barbie Christmas Ornament line of collectables has its beginnings when a special line of dolls was first released by Mattel back in 1988. They were known back then as Holiday Barbie dolls and were produced specifically for Christmas.

Five years later, in 1993, Hallmark began producing ornaments that matched these special holiday themed dolls made by Mattel. Hallmark then began releasing their own Barbie Ornaments after this.

By the year 1999 the name of these Barbies was changed to the “Celebration Barbies” alongside the release of the Millennium Princess Doll, though this name would later be reverted in 2015 when it was changed back to Holiday Barbies.

Because of the rich history that these Barbies have seen they have become quite popular with collectors although they are not extremely valuable as of yet.

They are limited edition and only released during one specific time of year, making them more rare although they aren’t as sought after as some other collectibles.

Some of the Barbie ornaments are worth quite a bit more than others. This can be attributed to the look of the Barbie, certain events that surrounded its release, and other things such as rarity and availability.

There are quite a few different Barbie Christmas Ornaments that are worth a decent amount, so if you are looking to sell these collectibles then make sure that you check the current prices and do some research to ensure you are getting the best price for your item.

You may also choose to hold onto your doll, as they seem to be growing in price as the years go by.

Anyone who owns a pristine first edition Hallmark Christmas Barbie ornament will be quite pleased if they decide to hold onto it for a few more years, seeing as they are getting rarer and rarer with each year that passes.