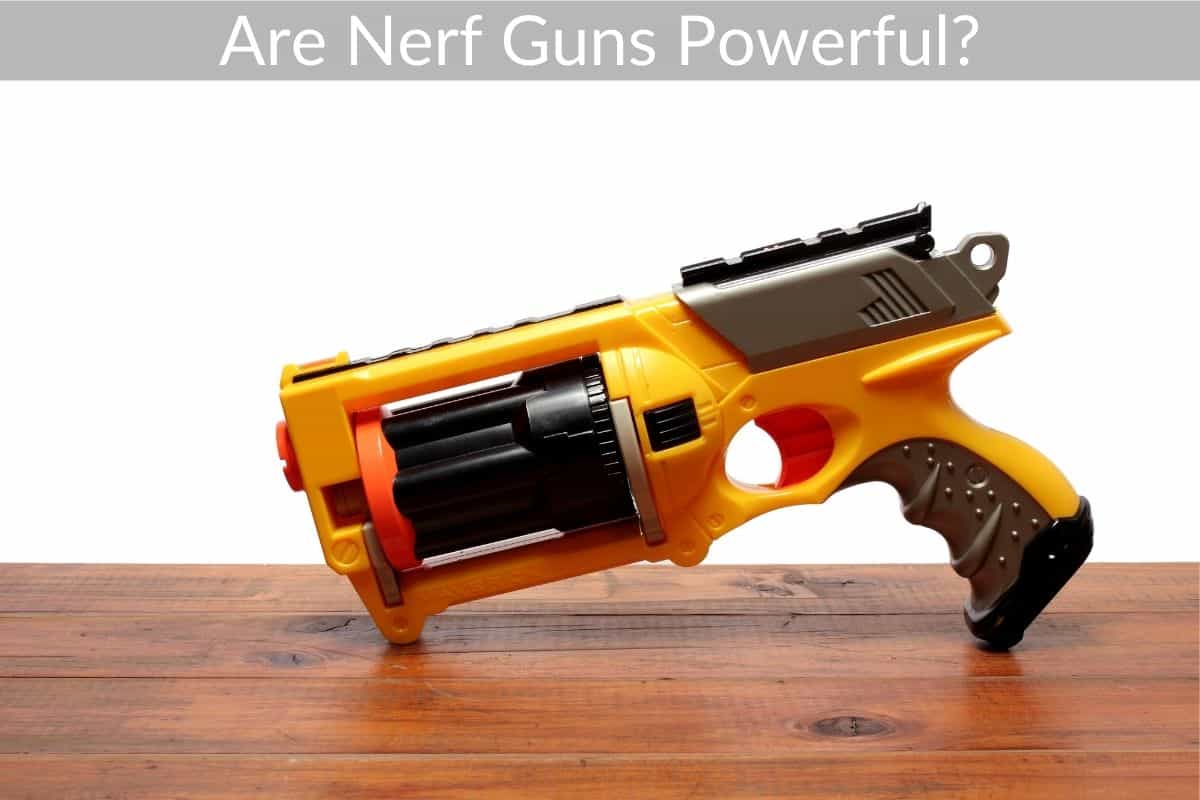 A Nerf Gun is designed to have a degree of impact on the other person upon release. The gun works by releasing the Nerf bullets, which are made out of foam at the target at high pressure.

But does that mean that Nerf Guns are powerful?

In general Nerf guns would not be considered very powerful as they don’t shoot the foam darts hard enough to hurt anyone seriously. However, if that power was used with a different dart besides foam it would be powerful enough to hurt someone.

Nerf guns have a plunger that works by sucking air and loading the barrel with pressure. That pressure is then released and pushes the foam dart forward somewhere between 20-100ft depending on the model.

Once the trigger is pulled, the pressurized air will send a dart into the air at high pressure. The greater the pressure, the further the dart will shoot and with greater impact.

So, Nerf guns can have an impact.

There are different Nerf guns available in the market with varying power and impact. Some Nerf guns have simple triggers and mechanisms. They look more like tiny toy guns that are unlikely to have significant power and impact to cause any harm to the opponent.

These guns are the safest as you can use them without fearing any injury. However, there are also other larger versions of Nerf Guns that can release darts at a significant speed and with high pressure, like the Blasters and Recons.

Can Nerf Guns Cause Injury?

Since Nerf guns can release foam darts at very high speed and high pressure, questions are raised about whether they‘re safe for children to use. The manufacturers assure parents and children alike that if Nerf guns are used with the correct precaution, there‘s minimal chance of an injury.

However, since the Nerf guns release projectiles that travel at a high speed, there is likely to be some impact on contact with the human body.

Nerf darts can cause injury but the only real issue is hitting someone in the eye. That is why Hasbro recommends everyone wears eye protection with playing with Nerf guns.

One of the human body’s most delicate features is the eye. If you get hit by a dart in the eye accidentally, you should get it checked out immediately.

The company warns players to wear protective glasses or goggles so the dart can‘t enter their eyes and hurt delicate tissue. It‘s also necessary that parents take the correct precautions when buying Nerf guns for kids.

The toy is only suited for children who are 8 years of age and up, so putting such toys in the hands of younger kids can result in injuries.

Hasbro, the company behind Nerf guns, also states that the darts used with Nerf guns are made from the softest foam, and their guns follow Global Safety standards when used correctly. You should also ask your children not to focus the gun on people‘s faces or near delicate body parts.

Children must also not shoot the gun at people from a close proximity as this raises more concern for injury.

Hasbro has also stated that all these Nerf guns go through rigorous testing to ensure they‘re safe and fit for use among children. However, the warnings stated on the packaging must be followed.

You should also ensure that the Nerf Darts you buy for your children are actually from the Hasbro company and not fake ones. Replicas are often made from a stronger foam, and they likely haven‘t gone through rigorous testing to save your children from injury, which is why these may be cheap and not the best option for you Nerf Blasters.

Now that I have covered whether injuries are likely with a Nerf gun the next thing I want to cover is whether they are destructive.

Nerf Guns aren‘t inherently destructive, but they can be if not used properly. You could easily break things if you use a longer range Nerf gun indoors.

Nerf guns involve shooting foam darts across the room so hitting things like TVs, vases, etc. can happen and it can be destructive to that item.

Some of these Nerf guns are automatic and can thus release many darts one after the other which is also a good way to knock something over and break it.

Some types of Nerf Guns are automatic, some are semi-automatic, all of these can release foam bullets one after the other, and the impact can disorient a person. If you‘re playing with these blasters or shooters near the stairs, the impact may be enough for another person to stumble back and fall down the stairs.

With Nerf Guns, you have to be careful of your surroundings at all times; even the smallest movement could cause a larger injury. Furthermore, Blasters and other guns have large bullets that can hurt people badly enough to bruise them.

2. Destructive For The Home

If your kids want to play with Nerf Guns at home, you must ensure they do it in a completely open place. In closed spaces, Nerf guns can create an impact and hurt other people.

The Nerf darts also have enough of an impact to knock over fine china and delicate articles from your counters or tables to the floor. Your precious artifact may shatter in front of your eyes.

Some of the bullets in bigger Nerf blasters also have enough impact to shatter an LCD screen, so ensure there isn’t any Nerf play in places where valuables are lying around.

3. Destructive For The Mind

Many parents don’t believe their kids should be allowed to play with toy guns. With the past two decades resulting in many school shootings in America, the fear of being a parent to the perpetrator of the next Columbine is very real among parents.

However, toy guns have not been directly related to people who decide to shoot up schools. Nerf Guns can also be a skillful activity that helps your child‘s physical health.

This fact means that it may cause some harm to a child, but only if their use isn‘t monitored.

If children are using Nerf guns to blow off some steam at someone else that they are angry at, instead of taking away their Nerf Guns, ask them to acknowledge their emotions and talk about their feelings.

Rest assured, most children only want Nerf guns because their friends have them, and it‘s really only destructive in theory.

Nerf guns could be considered powerful but they don‘t have enough power to cause significant damage in most cases. Some of the larger guns would require even more precaution than the smaller guns.

However, Hasbro states that Nerf guns are made under Global Safety standards and are unlikely to have enough power to cause significant damage.

However, Nerf guns still use projectile foam pieces, and if your children use them recklessly, they may harm themselves or the things around them.

You should ensure you don‘t give a Nerf gun to a child below eight and tell your children to refrain from aiming towards delicate features of your body, such as the eyes.

Nerf guns can be destructive for your children and home. However, if you have the appropriate conversations before buying your children a Nerf gun, you should be okay.