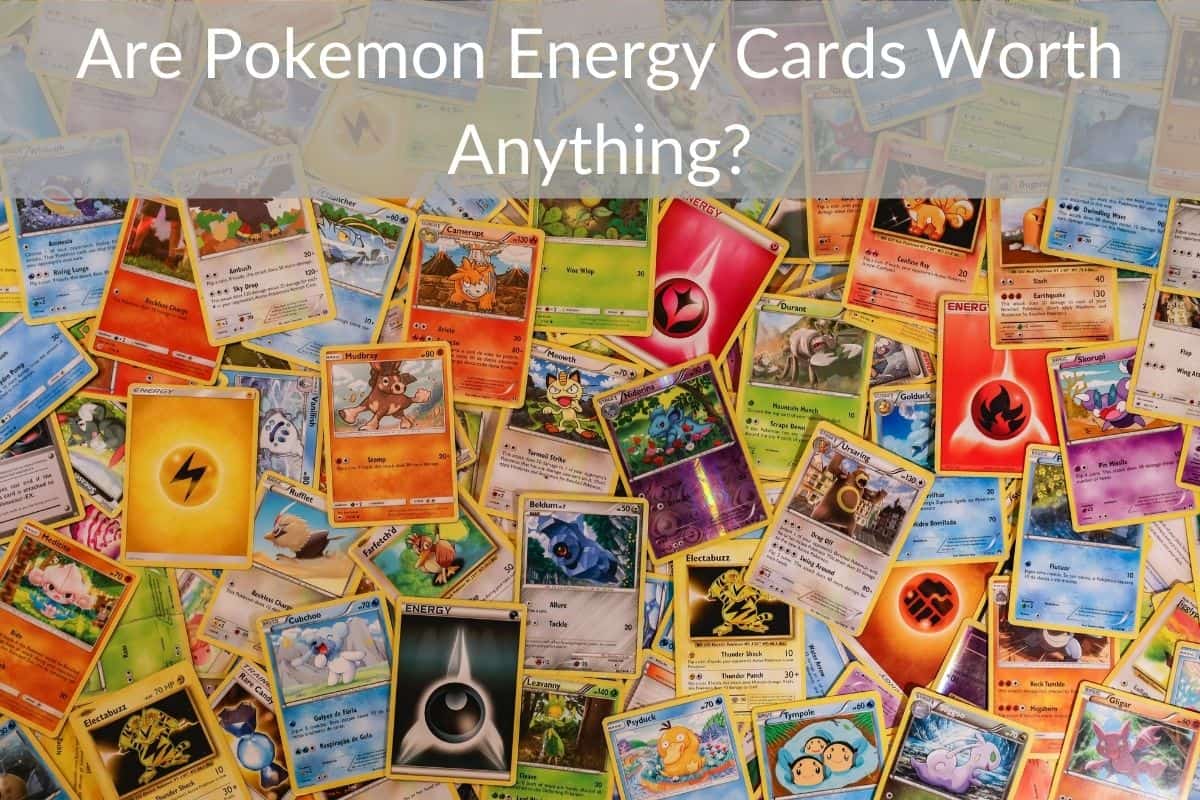 Being worth something means there are few of them that are valuable. When a company doesn’t make any more of a product or if they only made a limited amount in the first place, the value of that product increases.

The same goes for Pokemon trading cards. With Pokemon making a comeback, some of its rare cards are going for thousands of dollars. If you have a stash of Pokemon energy cards in your closet from a few years back, you may be wondering if they are worth something.

Pokemon energy cards are worth a little bit of money although not very much. Most Pokemon Energy cards will only go for a few dollars each at most.

The basic Pokemon energy cards are grass, fire, water, lightning, psychic, and fighting. These are really common and so won’t be worth as much as the energy cards, metal, fairy, and darkness because fewer of these were made and it is rarer to find them.

Then there’s the holographic energy card which may be worth a little more since they have only been introduced in some of the Pokemon battle packs.

Even though these cards are worth some money, it is not very much.

It is best to sell the regular energy cards in bulk since they are probably worth only up to $1 each. Sets of more rare energy cards can be worth anywhere from $25 to $100.

So be on the lookout to find Pokemon energy cards that may put some money in your pocket while also keeping in mind that they are not as valuable as many of the other cards.

What Is The Rarest Pokemon Energy Card?

Over the last few years Pokemon has been gaining popularity again. From the Pokemon Go mobile game to social media influencers receiving expensive cards unexpectedly, the game is becoming well known once again.

In case you were wondering, some Pokemon cards are worth a lot of money and the rarer the card the more that value increases. This is true with all Pokemon cards including energy cards.

One thing about these card sales to keep in mind though is that they were graded a PSA 10 which is likely why they went for so much.

It wasn’t that the cards were incredibly rare it was instead that they were in incredibly good condition for a card that is over 2 decades old.

Unless you recently opened an old Pokemon pack or found some pristine energy cards you are unlikely to get anywhere close to this value. You will also have to spend a decent amount getting the cards graded before you can try and sell them as well.

How Can I Tell If My Pokemon Cards Are Worth Money?

Do you have a stack of Pokemon cards stashed away in the attic? Maybe you were an avid collector of all things Pokemon back in the day and have been wondering what to do with all of your old cards.

The easiest way to check your Pokemon cards and see if they are worth anything is to head over to eBay and look at the completed listings for that specific card. You can easily look at the sold data to see whether there is any demand for your specific cards and how much they should sell for.

Rare Pokemon cards can be worth a lot of money. If the card is kept in mint condition the value goes up.

Some things to check for to see if a Pokemon card is valuable are the symbols on the bottom right hand corner of the cards. A circle is common, a diamond is uncommon, and a star is rare.

Some cards made in 1999 to the early 2000s that say “Wizards of the Coast” on them should be examined more closely for a rarity check. First edition cards are rare too and can be sold for a good amount.

These will feature a first edition stamp at the bottom of the card to the left of the artwork.

The collector’s number may give you a clue to how rare the card is. It is said that if a card has a collectors number higher than the total number of cards printed in it then it is a rare card.

But this can be tricky since Japanese Pokemon cards did not start putting collectors numbers on their cards until later on.

As mentioned before, holographic cards can be worth money as well as cards with symbols or words after the name. A full art Pokemon card with the text printed over the art could always be a rare find.

Will Pokemon Cards Increase In Value?

Collecting Pokemon cards is still a hobby among so many people. In recent years it has been making a comeback and new collectors are looking to make some additions to their stash.

Then there are some people who buy boxes of Pokemon cards just to look through and find rare ones to sell. There is always a chance you will find a gem and walk away with some extra money in your pocket.

It is said that Pokemon cards will increase in value since the demand for them is rising and supply is dropping, but is that true?

Unfortunately there did no way to know if a collectible (like Pokemon cards) will continue to increase in value or not.

First edition Pokemon cards are not being made, making them a limited supply and increasing their value because of the high demand. If a card is more difficult to obtain then it will be pricier.

So, as time goes on, it makes sense that the Pokemon cards will get more and more rare with only a few left and they will keep increasing in value.

Even though the value of Pokemon cards may keep increasing there are no guarantees. They could quickly fall out of favor and the prices could plummet.

but if there is no demand at all then rarity won’t increase the value by much.

There are many ways online to sell and buy the collectors cards and if needing advice on a particular card it is always helpful to ask a fellow Pokemon collector.

With the world so in tune with social media it is no wonder that the sales of Pokemon cards have been rising. Social media influencers are making the trading card game super popular by buying Pokemon cards and looking for rare and valuable ones.

This excited many people to buy and search through Pokemon cards in hopes of receiving a real  valuable card to sell for lots of money.

Because of this, many stores sold out of all of their Pokemon cards.

One thing I know for sure, Pokemon cards are currently worth quite a bit. Pokemon energy cards may not be worth as much as the other first edition cards but even these can be worth a decent amount of money, especially if they are in good condition.