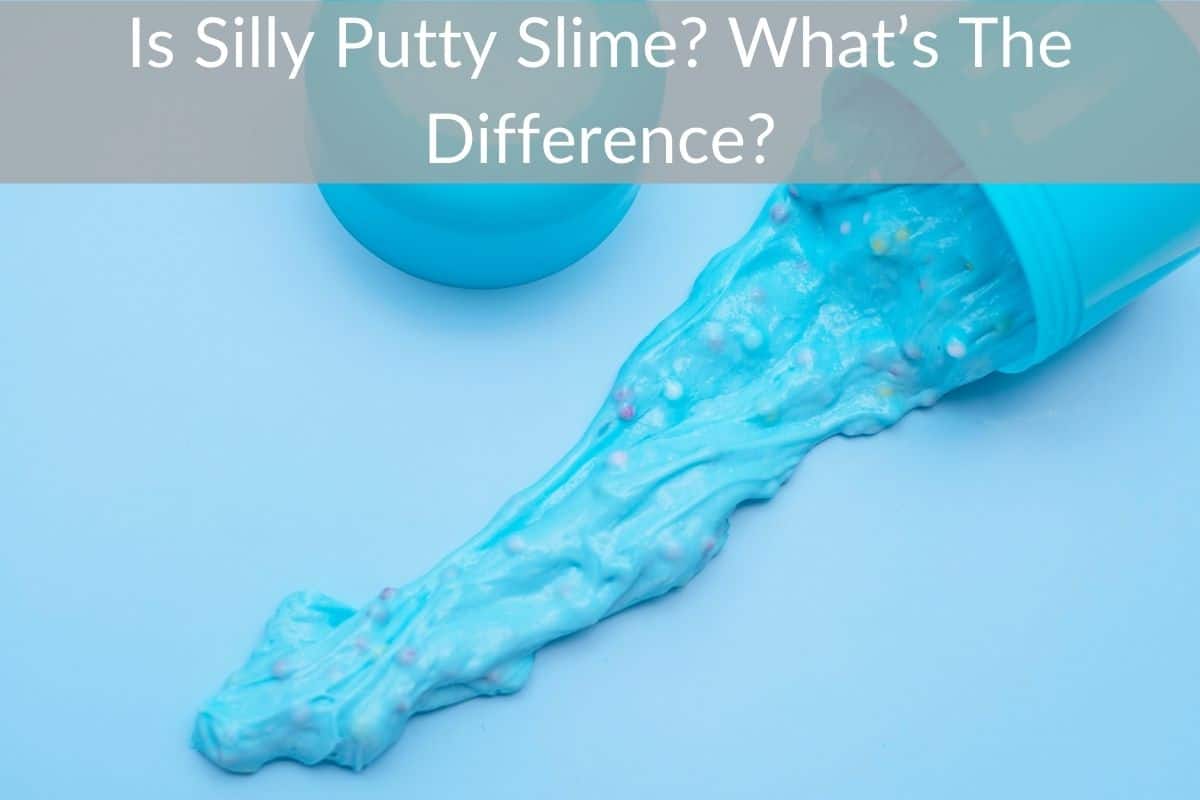 The bizarre satisfaction of playing with slime is not just for the kiddos. Whether it’s slime videos on Instagram or playing with the gooey stuff after a long, stressful day at work, it’s quite addictive.

If you’re anything like me, you, too, have seen various slime videos before dozing off. After all, they seem so therapeutic, don’t they?

In fact, playing with slime has long been associated with feelings of calmness, mindfulness, and stress relief. Personally, I would give anything up to get my sweet time to relax and de-stress with some slime in my hand.

However, I’ve often seen people confuse slime with silly putty, and I can’t help but correct them every time.

So, if you, too, are wondering, “Is silly putty slime?” here are my two cents on it.

Silly putty and slime are not the same thing. In fact, silly putty is bouncier, more rubbery, and more stretchy than slime.

If you’ve ever purchased silly putty, you may have noticed how it never takes more than a second to snap into two if you pull it apart quickly.

Hence, this article is aimed at differentiating between the two. Additionally, you’ll also get to learn about various benefits associated with both slime and silly putty.

To see the most popular slime sets just click here.

Silly putty and slime may appear the same and are also made using many of the same ingredients. However, there’s one crucial difference between the two, the amount of activator used in silly putty is higher than that used when making slime.

Adding more than the required amount of activator in slime may cause it to become stiff. In fact, adding more activator to your slime can simply turn it into silly putty.

Moreover, silly putty is thicker than slime and requires the use of borax and glue. The goal is to make sure it turn out thicker and less sticky than slime.

The more activator there is, the bouncier, the more rubbery and moldable your putty can turn out to be.

How to Make Silly Putty?

While making putty, make sure not to add any water to the glue. Additionally, also avoid adding ingredients like baby oil or lotion to the glue.

Just add the plain simple glue, food coloring, and activator, mix it well, and you’ll have your silly putty ready.

On the other hand, if you add ingredients like baby oil or lotion to the mixture, you may end up making slime instead.  As you can see, it only takes slightly varying quantities of certain ingredients to make both silly putty and slime, which is why sometimes it’s hard to differentiate between the two.

What Is Therapy Putty?

Is It Putty Only Used for Kids?

If you’ve ever had the chance to learn about different rehabilitation programs, you may already know the importance of therapy putty. This further brings us to the conclusion that it’s not only used for kids.

When people suffer from a stroke, an injury, or an illness that has an impact on their finger strength or handgrip, therapy putty is used to help them regain that lost strength. Moreover, it also plays a role in occupational therapy, especially for kids with conditions like cerebral palsy and ADHD.

Playing With Slime: Some Super-Slimy Benefits

By now, we know the answer to the question, “is silly putty slime?” way too well. We also know how useful silly putty is in certain circumstances; however, what we don’t know is how true the claims of slime being calming and relaxing are.

Some people may wonder about what value can a gooey and icky substance add to your life. And all I can say is, you need to experience it yourself to find out.

For starters, you can just watch a few slime videos to get what I’m saying.

While it’s not something that eliminates the need for other interventions, playing with slime is associated with calming your nerves. Imagine coming home after your tiring shift, and all your mind desires at that moment is silence and some time away from your noisy thoughts.

This is when you take your slimy buddy out and squeeze it till your nerves calm down. Yes, I know how much children love it, but I also know that it’s an all-rounder and an amazing sensory toy for kids and adults alike.

When you’re focused on the runny texture of slime, and your hands are only concerned about getting it together in one place or preventing it from getting out of your grip, you’re essentially taking your mind off of stressful thoughts, even if it’s for a short while.

How Does Slime Soothe Children?

We all probably know what sensory input is. It’s the information our senses receive to help us learn about the environment.

When children receive negative stimuli like screaming and shouting, it often triggers their fight-or-flight response. However, when they get positive sensory input, it does the opposite.

This means your child is able to conserve their physical energy.

Even though all of our senses can somehow promote relaxation, the sense of touch is a direct pathway to promoting a meditative state, as mentioned here.

Hence, children become more mindful of what’s happening in the present and tune out from the anxiety that past events and uncertain future bring – at least for a while.

Slime, in this way, acts as a positive sensory input because, in your child’s mind, they’re touching something that feels good in their hands. One of the biggest reasons playing with slime does not add any stress to your mind is that there isn’t any right or wrong way to do it.

The bottom line is that both silly putty and slime are useful in their own capacities but understanding the difference between them both is still important.

In the end, if you think this article hasn’t been able to convince you yet, maybe it’s time to get your hands on slime and silly putty and test them out for yourself.