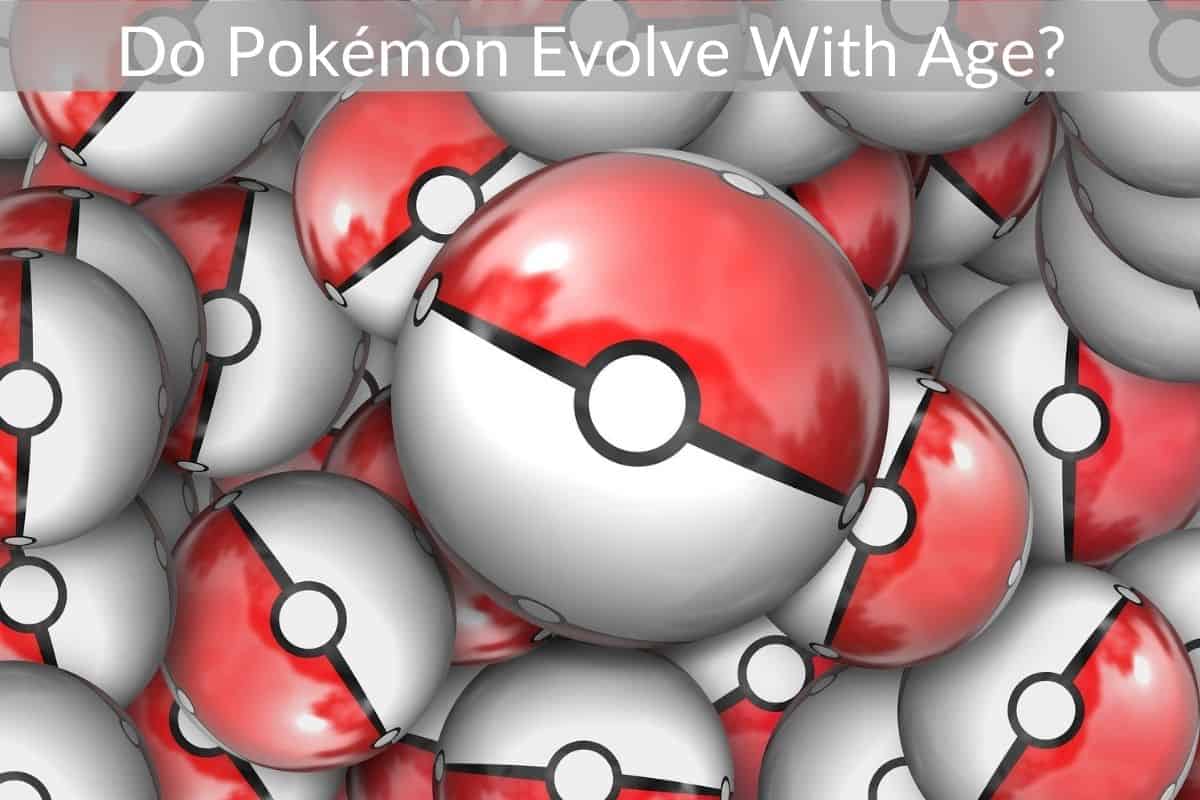 When observing the different Pokémon in their universe, it appears that when a Pokémon evolves they have also immediately gotten older. These evolved Pokémon appear older and tend to take care of those in their species that have yet to evolve.

The evolved Pokémon typically become faster, stronger, and wiser. But does a Pokémon’s age correlate with their evolution?

While it may appear that age and evolution are the same to all Pokémon on the outside, that is not the case. A Pokémon does not immediately age the minute it evolves.

Pikachu also chose not to evolve and is working on becoming stronger and more evolved without undergoing the evolution process.

What Happens When Pokémon Get Old?

Have you ever wondered what happens when the Pokémon get old? We know that Ash stores his older Pokémon, and those he does not use as often, at the Professor’s lab.

But what about all the other Pokémon in the wild, what happens to them?

When a Pokémon gets older it will typically die of natural causes. We do know that the Pokémon die because the Pokémon Tower in Lavender Town has a graveyard for the Pokémon.

As the Pokémon continue to get older, they do become more evolved, advanced, and wiser as well. When they are old they will either die of natural causes or have other options, such as sacrificing themselves during battle or just living life in the Pokémon universe.

Other than just growing old, not much else happens to the Pokémon as they get older.

Why Does Pikachu Never Evolve?

While almost all the other creatures in the Pokémon universe evolve and become stronger over time, one Pokémon remains the same, Pikachu.

Why has Pikachu never evolved?

Pikachu was given the option to evolve with the Thunder Stone after he lost to Lt. Surge’s Raichu. Instead of choosing to evolve and become stronger right there, he chose to stay how he was.

Pikachu wants to prove to himself that he does not need to evolve in order to become stronger. He wants to defeat stronger Pokémon without having received his other powers from evolving.

Pilachu was the first of Ash’s Pokémon to choose not to evolve, Bulbasaur followed later.

What Are The Strongest Pokémon?

Do you have any of these?

Even though Arceus is not from the original generation of Pokémon, it has been titled: the Original One. Arceus is one of the most mythical of Pokémon and stands at over ten feet tall, and weighs in at over 700 pounds.

One of the oldest Pokémon, he stands at twenty-three feet tall and weighs 455 pounds. This dragon can fly and unleashes one of the strongest attacks of all the Pokémon.

It is the lead of the Legendary Birds of the Hoenn Region and can also help to calm them down. Rayquaza not only inflicts damage but also decreases its opponents’ defenses and special defense abilities.

This terrifying Pokémon earned his spot on the strongest list not through looking strong and terrifying but through his powers.

Although he is pretty small (standing at four foot eleven and ninety pounds) Gengar is still a terrifying Pokémon. He not only pranks people but is also capable of flying and taking over a person’s mind!

Mewtwo is one of the great and powerful Pokémon. This creature stands at six feet seven inches tall and weighs in at 269 pounds.

Mewtwo is the spawn of Mew and Mew’s DNA was altered while carrying Mewtwo. Mewtwo is capable of controlling enemy minds and teleportation.

Mew has the DNA of all the original Pokémon. Mew may look tiny at one foot, four inches, and nine pounds; but this adorable Pokémon is capable of any attack.

Mew can shrink down so small that it can only be seen through a microscope.

While Ditto may not look like much of a threat at one foot talk and only weighing eight pounds, it can pack a punch. Ditto is capable of transforming not only into any shape but also into any Pokémon.

The only way to tell it apart from a Pokémon it has transformed to is by its eyes. The beady eyes of the Ditto never change.

This mighty flame-throwing beast is a ferocious Pokémon. Standing at just five feet, seven inches, and weighing 200 pounds, this Pokémon will not only start a forest fire but can also melt through glaciers.

Which Pokémon Have No Weaknesses?

Now that we have covered some of the strongest Pokémon, what about the Pokémon that have no weaknesses?

Are there such creatures in the Pokémon universe?

The Eelektross line of Pokemon have no weaknesses. The reason they do not have any weakness is that they are the only pure electric-type and possess the ability to levitate.

Their levitation makes them immune to any ground-type moves. Tynamo, Elektrik, and Eelektross are the three immune Pokémon from the Eelektross line. Even though they are immune, it is not impossible to defeat them.

You can use the move SmackDown in addition to Neutralizing Gas to help weaken the Eelektross and defeat them.

While some Pokémon may choose not to evolve, all Pokémon do age. Who knows, maybe once Pikachu has proven that he can defeat all other Pokémon, we may still get to see him evolve too.