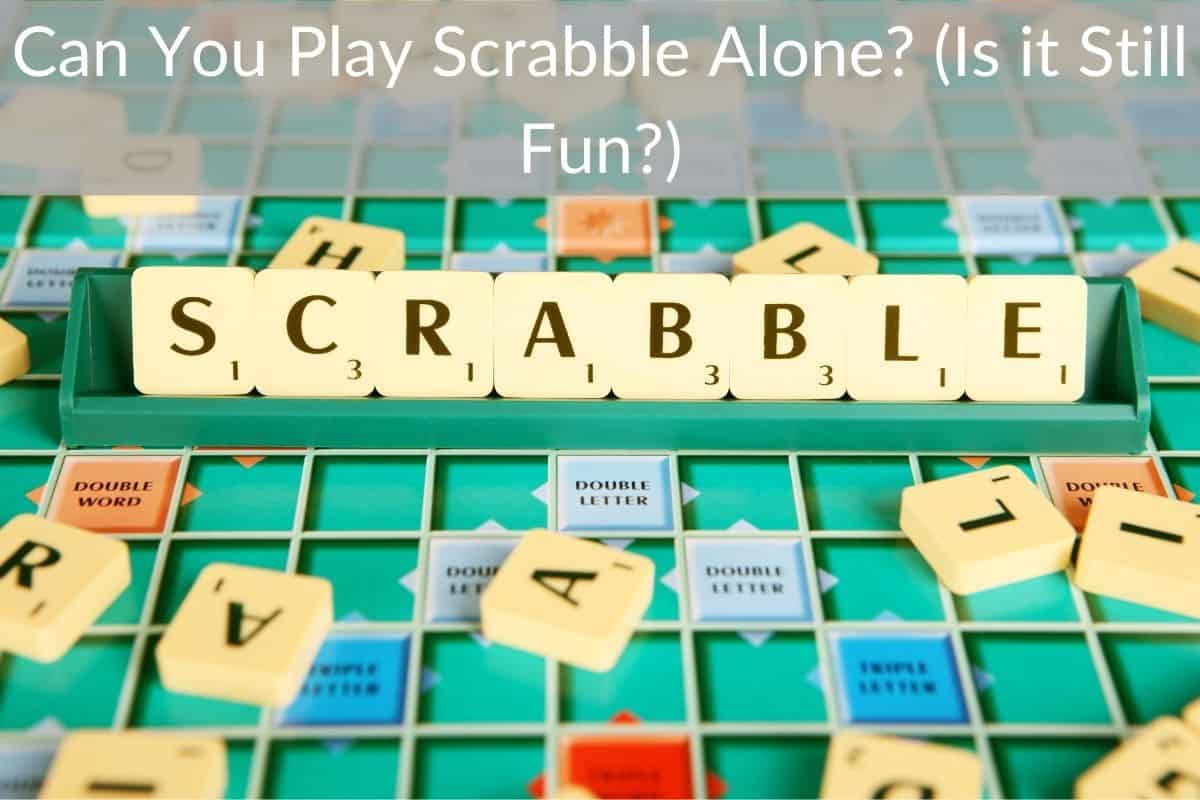 The game of Scrabble is a classic board game that originated during the Great Depression. It has been around since the 1930’s and is currently published by Hasbro in the US and Mattel globally.

Scrabble was a fresh take on crossword puzzles, and is played around the world.

Scrabble was developed to be played by 2-4 players but can be played solo if you wish.

Although you can play Scrabble alone it isn’t nearly as much fun. It is basically a way for you to practice your spelling and knowledge of words so you can be better the next time you play with friends or family.

Although Scrabble has been developed for PC, console, and mobile applications it is always better to play against someone or a computer “bot”.

So if you don’t want to be locked down by a physical board, you can always go digital.

In regard to whether Scrabble can be played alone, the answer is “kind of”. Though Hasbro, the publisher of Scrabble, does not have any specific rules to play solo, there are “House rules” that have been developed over the years for that purpose.

The gist of it is you will play the same basic game, but only play against yourself.

You place a word and draw tiles back to the right starting hand until all the tiles are gone or no more words can be played. The intent here is to continually try to beat your personal high score.

Many dedicated or competitive Scrabble players use this style of play to improve on their own skills.

This helps the player recognize combos, or sharpens their ability to recall obscure words from the deep recesses of their mind.

Whether that sounds fun to you or not will really depend on your own mind set and personal goal while playing the game. Some might find it relaxing, while others will find it mundane and boring. This is truly one where mileage may vary.

To see all of the different Scrabble editions and spin-offs currently available you can click here.

Is Scrabble Good For The Brain?

Scrabble is a game that focuses on creating words from random letters on a board that is always adjusting. As play moves around the board, a word you have worked out with your tiles might not be available due to another player’s tile placement.

Scrabble also forces you to expand your vocabulary. One cannot play “chutzpah” (worth 77 points without a bonus) if you have never seen or heard the word before.

If you are looking to exercise your mind, challenge your memory, and expand your vocabulary then Scrabble is probably a perfect game for you to play.

So yes, Scrabble is good for your brain.

It forces you to think, recall information, and inspires you to expand the words you know. This will cause you to have a better desire to learn and will impress your friends when you use quixotic in a way that actually makes sense.

Truly, anything that forces you to think and continue learning is healthy for your mind. So Scrabble is just one of many games that can accomplish that.

Can You Play A Single Letter In Scrabble?

Often you will have a starting set of letters that it seems you simply cannot create a legal word. If you have the letters A or I, and none of the other letters in your starting group can be combined with either letter, you might feel like playing one of those simple, one letter rules.

However, this is usually not recognized as a legal move. In fact, the official Scrabble dictionary does not include any single letter words.

Therefore, you are not allowed to start a game of Scrabble with a single letter tile.

You can make plays later in the game where you only place one tile that, combined with letters already on the board, make a new word.

So even though you cannot start a game of Scrabble with one tile, you can play one tile to create words in order to score points later in the game.

How to Play Scrabble

Scrabble is a pretty simple game to learn, but it takes a very long time to truly be considered a master at the game. No matter who is playing, the first step to playing Scrabble is to select a source of words to reference when words are challenged.

This is usually a word list or dictionary nearby.

Once the reference source is selected, the 2-4 players each pull one letter to determine who will go first. The player that pulls the tile closest to the beginning of the alphabet is deemed player number one. In North America, the blank tiles take precedence over the letter “A”.

Once the order is decided, each player draws 7 tiles as a starting set of letters and play begins.

The first player must use the center tile as part of their word. From there, each player, on their turn, has three options for their turn: Pass (don’t play any tiles), exchange (discard a number of tiles and draw that many from the bag of letters), or play one or more tiles on the board and tally the points in the word made.

While you are playing you will want to maximize the points with each tile you place. There are bonus spots on the board that will allow you to get double or triple points for either a letter or word.

If you are the first player to use one of these tiles, you get the bonus points for your word. These bonuses are multiplied if you happen to cover multiple bonus squares.

If you are well versed enough to use all seven of your tiles, you get to score a “bingo”. This means you add fifty points to the word total after all other bonuses have been applied.

The game ends when a player uses their last letter and there are none left to draw, or 6 consecutive rounds are played with no points scored. At that point, players with remaining tiles subtract those points they have remaining from their total, and the player with the most remaining points wins.

If there is a tie, the player with the most points before adjusting for unplaced tiles wins.

The world is full of people who love vocabulary, and are always looking to expand their own. Sometimes, one has a desire to use words in a playful way, and there simply isn’t anyone around to play with.

Scrabble might not have been made for this purpose, but if you are willing to play solo, it is easily done.